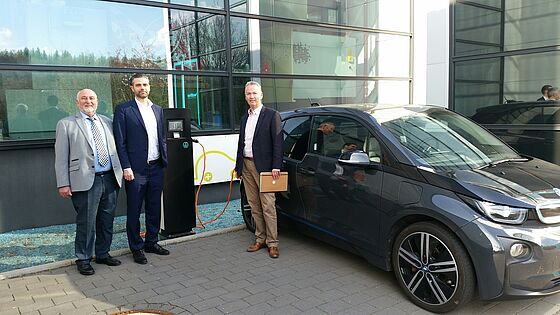 Adolf Kauth, City Mayor of Eisenberg, Kai Kalthoff, Managing Director of WALTHER-WERKE, and Rainer Guth, Head of the District Authority (from left)
Following the presentation of WALTHER-WERKE's strategic activities from recent years and a look towards the future, Rainer Guth unveiled his goals as the head of the district authority for the Donnersberg district.

Effective business development and the responsible handling of renewable energies are just some of the key areas that Rainer Guth wants to address. Therefore electromobility was an important topic during the visit to Eisenberg on 4th April 2017. "We all agreed that the importance of the automotive industry in Germany and especially in our region is undisputed. However we all now need to actively drive the change in technology toward electromobility forward if we want to stay on the path to success", says Kai Kalthoff, Managing Director of WALTHER-WERKE.

Alongside electromobility, Rainer Guth, Adolf Kauth and Kai Kalthoff also feel that collaboration and cohesion within the region are especially important. Existing corporate networks need to be stepped up further in future in order to make the greatest possible use of the positive effects these generate for everyone involved.

Fast, and above all, safe charging are important criteria for home loaders. The basicEVO from WALTHER-WERKE guarantees the user highest security...

WALTHER-WERKE from Eisenberg (Pfalz) expand their charging infrastructure portfolio with the wall box basicEVO. By introducing this new wall box, the...

On October 26, students and graduates of the University of Kaiserslautern had the opportunity to gather information about WALTHER-WERKE during the job...